Learning about the Jomon Prehistoric Sites in Northern Japan

The four prefectures of Hokkaido, Aomori, Iwate and Akita boast natural splendor and verdure as great as those of the Shirakami-Sanchi and Shiretoko World Heritage areas.

Blessed with this rich natural environment, the Jomon Prehistoric Sites in Northern Japan serve as important cultural heritage sites that have passed down the livelihoods and spirituality of people from the Jomon period, who led sedentary lifeways based on hunting, fishing and gathering over a period of more than 10,000 years.

Recognized for their outstanding value, the Jomon Prehistoric Sites in Northern Japan were inscribed on the UNESCO World Cultural Heritage List on July 27, 2021.

In Japan, the Jomon period was preceded by the Paleolithic period, a long period of cooler temperatures, and was followed by the Yayoi period, characterized by paddy rice cultivation and agriculture.
→See the Chronological Table of the Jomon Period Vis-à-vis World History.

Northern Japan, where the Jomon Prehistoric Sites are located, has varied landforms, such as mountains, hills, plains, and lowlands, as well as inner bays, lakes and marshes, and rivers with an abundant flow of water. This area is blessed with forest and aquatic resources. Cool-temperate deciduous broadleaved forests consisting chiefly of beech spread widely, and the intersection of warm and cold currents creates ideal fishing conditions off the coast. Also, migratory fish such as salmon and trout swim upstream in the rivers.

Under such environmental conditions, people living in Northern Japan were able to secure food in a stable manner, and they initiated a sedentary way of life using pottery around 15,000 years ago. Over the subsequent 10,000 years, they continued a lifestyle based on hunting, fishing, and gathering, adapting to environmental changes such as climate warming and cooling and the corresponding marine transgressions and regressions.

Already in the very early stage of sedentary life, they developed a complex spiritual culture. They made graves and created dumping grounds, artificial earthen mounds, and stone circles that were used for rituals and ceremonies. These were built for ancestor and nature worship, for prayer for the fertility of nature, or to confirm a social bond across the generations.

The Jomon Prehistoric Sites in Northern Japan consist of 17 archaeological sites that illustrate the way of life of people at that time, including settlements, burial areas, and stone circles where rituals and ceremonies were performed.
→List of the Component Parts

The Six Stages of Sedentism

While the Jomon period is divided into six sub-periods (Incipient, Initial, Early, Middle, Late and Final), the Jomon Prehistoric Sites in Northern Japan are categorized into three main stages of sedentism from its emergence to subsequent development to maturity, and each stage is divided into two sub-stages.

Each component part of the property belongs to one of the six sub-stages as determined by the structure and environment of the archaeological site. As a serial property, the component parts contribute as a whole to the expression of its Outstanding Universal Value.

The Six Stages in the Development of Settlements and Spiritual Culture 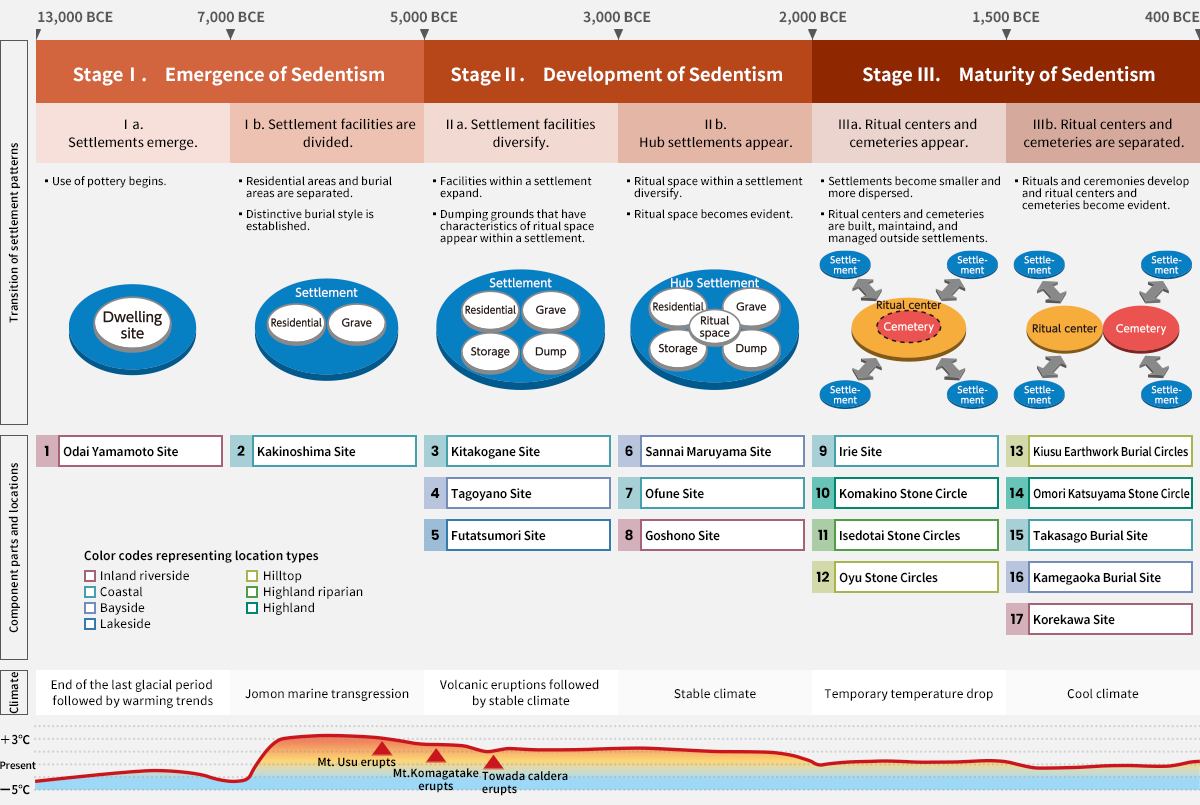 In its extended 44th session, the UNESCO World Heritage Committee inscribes the Jomon Prehistoric Sites in Northern Japan on the World Heritage List.

Jomon Prehistoric Sites in Northern Japan consists of 17 archaeological sites that represent the pre-agricultural lifeways and complex spiritual culture of a prehistoric people. Located on the southern part of Hokkaido Island and across the Tsugaru Strait on the northern part of the Tohoku region, this serial property attests to the emergence, development, and maturity of a sedentary hunter-fisher-gatherer society that developed in Northeast Asia from about 13,000 BCE to 400 BCE. The series of settlements, burial areas, ritual and ceremonial sites, stone circles, and earthworks is located in a variety of landforms such as mountains, hills, plains, and lowlands, as well as near inner bays, lakes, and rivers.

This area of northern Japan had rich arborous and aquatic resources, with deciduous broad-leaved forests that featured abundant nut-bearing trees, as well as ideal fishing conditions created by the intersection of warm and cold currents off the coast. Over a period of more than 10,000 years, the Jomon people continued hunter-fisher-gatherer lifeways without changing to an agrarian culture, adapting to environmental changes such as climate warming and cooling and the corresponding marine transgression and regression.

The Jomon people initiated a sedentary way of life about 15,000 years ago, as indicated tentatively at first by the use of pottery, and later by the construction of more permanent dwellings and ritual sites, and the year-round exploitation of nearby resources. Already in the very early stage of sedentary life, the Jomon people developed a complex spiritual culture. They made graves and also created ritual deposits, artificial earthen mounds, and stone circles that were probably used for rituals and ceremonies, and confirmed a social bond across the generations and between the settlements.

Criteria under which Inscription is Proposed

The Jomon Prehistoric Sites in Northern Japan, on the World Heritage List on the basis of criteria (ⅲ) and (ⅴ).

[ Criterion (iii) ]
The Jomon Prehistoric Sites in Northern Japan bears exceptional testimony to a globally rare prehistoric sedentary hunter-fisher-gatherer society which nurtured a complex spiritual culture, as revealed by archaeological artefacts such as clay tablets with the impression of feet and the famous goggle-eyed dogu figurines, as well as remains including graves, ritual deposits, artificial earthen mounds, and stone circles.

(iii) Bear a unique or at least exceptional testimony to a cultural tradition or to a civilization which is living or which has disappeared;

[ Criterion (v) ]
The Jomon Prehistoric Sites in Northern Japan are an outstanding example of sedentary modes of settlement and land-use from the emergence of sedentism through its subsequent development and ultimate maturity. The Jomon people maintained an enduring hunter-fisher-gatherer way of life by adapting to a changing climate without altering the land significantly, as was the case with agrarian societies. To secure food in a stable manner, diverse locations were selected for settlements, including near rivers where fish swimming upstream could be caught, in tidelands where brackish shellfish could be gathered, and near colonies of nut-bearing trees where nuts and berries could be collected. Skills and tools for obtaining food were developed in accordance with the specific conditions of different locations.

(ⅴ) Be an outstanding example of a traditional human settlement, land-use, or sea-use which is representative of a culture (or cultures), or human interaction with the environment especially when it has become vulnerable under the impact of irreversible change;

Four Attributes of the Outstanding Universal Value (OUV) of the Property

The OUV of the property is illustrated by the following four attributes.

a) Demonstrating a lifestyle characterized by managed use of natural resources

The property is a rare example of sedentism based on hunting, fishing, and gathering which continued over a period of more than 10,000 years through the sustainably managed use of forest and aquatic resources.

b) Demonstrating complex spirituality, as evident in rituals and ceremonies

The graves, shell mounds, artificial earthen mounds, stone circles (i.e., circular stone arrangements), clay figurines, and other artifacts found at the property clearly demonstrate the spiritual culture of people in this region, including ancestor and nature worship and prayer for the fertility of nature.

The property specifically illustrates how people selected locations for settlements to secure food in a stable manner in places like mountainous, hilly and inner bay areas and near lakes, marshes and rivers, and how they developed skills and tools in accordance with the specific conditions of different locations.

d) Demonstrating the transition of the form of settlements

The property clearly illustrates that people in this region changed the settlement structure over the course of more than 10,000 years in adaptation to environmental changes (e.g., climate change and volcanic eruptions) and the social situation.

All component parts of the property are strictly protected, as they are designated as Historic Sites or Special Historic Sites under the Law for the Protection of Cultural Properties. In addition, a buffer zone of appropriate size has been delineated around each component part.

The local governments that have jurisdiction over the component parts have developed individual preservation and management plans to ensure the proper maintenance and management of the property and improve the local natural environments for the conservation and communication of its value.

Since the component parts of the property are basically buried underground, a high level of authenticity of the property has been maintained in terms of form and design, materials and substance, use and function, and the like.

The local governments that have jurisdiction over the component parts take all of the necessary protection measures. Accordingly, the value of the cultural heritage has not been compromised, and the property is in a good state of conservation.

All relevant local governments, including the prefectural governments of Hokkaido, Aomori, Iwate and Akita, have developed the Comprehensive Preservation and Management Plan, setting out the basic policies for conserving the OUV of the property in its entirety. Based on this, the Council for the Preservation and Utilization of World Heritage Jomon Prehistoric Sites and other organizations have been established and work for the preservation and management of the component parts is promoted under the supervision of the national government of Japan and in coordination with related organizations.